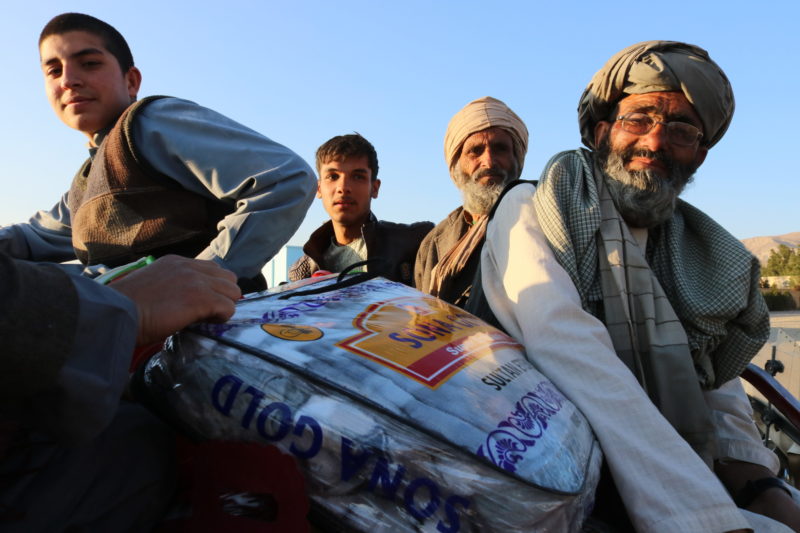 According to the UNHCR, about 2.6 Mio internally displaced persons in Afghanistan are dependent on humanitarian aid. Displaced or fled from conflicts or droughts in their own country, they often have no other choice but to fight for their survival in crowded refugee camps. They suffer from extreme cold of up to -15° C ( 5° F), even have to sleep in tents during strong snowfalls and often lack blankets or warm clothing. As they do not have any opportunities to find a job there, they neither have the opportunity to escape poverty. The pay for occasional jobs as day-laborers is not enough to support their family. These internally displaced families need our help.

Afghanistan, a region of crisis –there can be no talk of security

The humanitarian situation in Afghanistan remains complex, despite the encouraging attempts of peace talks and the political will behind it – it is one of the most insecure and unstable countries of the world.

Beyond that, Afghanistan is the largest area with the longest duration of having to cope with internally displaced persons in south middle Asia. Again and again, they face insecurity, conflicts and droughts, which have led to mass turnouts in Afghanistan -dislodging about 270 000 internally displaced persons and 230 000 locals caused by droughts alone. In 2019, another 132.171 have been dislodged due to the continuing conflict.

To offer a perspective in winter, we organize a yearly humanitarian emergency relief campaign and supply families with packages of food and material goods. Our packages contain vital goods, e.g. blankets and pails. Furthermore are the families supplied with staples like flour, sugar, oil and tea. Basics which help to avoid hunger.

In cooperation with the Afghani Women’s Society, which can look back on 27 years of work in the field of direct humanitarian action and aid without red tape, the goods are organized and distributed. With that, we strengthen the Afghan economy and the help arrives where it is needed most.

Where does the money go?

The camp Ghaibi Baba has been checked on site by the Afghani Women’s Society concerning size, security and neediness. It is in the 8th district of Kabul, around 10 km (6.2 miles) southwest of the town center and exists since 2009 and it is inhabited by about 300 families. They have been dislodged or fled from other insecure Afghan provinces, which are often the target of attacks like Nangahar, Wardak and Kapisa.

The living conditions of these internally displaced persons are deplorably bad, most of them live in tents or huts of clay. Most of those who do work are day-laborers but the money only meets the most basic needs to survive. What the families indeed do need here is clean drinking water, food and medical care.

Based on the wishes of the inhabitants of this camp and in cooperation with the Afghani Women’s Society, we want in a joint emergency relief campaign to distribute food packages to these families. Additionally, we want, with the aid of our member Winuss Azizi, to support the refugee camp Shayda-ee in Herat. 250 families with six to eight members, having mostly fled from Ghor and Farah to Herat due to turmoil and combats, are living here.

What is in the packages?

One package is enough to supply one of these families fort he winter with staple.

By the way: the surplus of donations is used for our school project in Kabul, where the lessons of many pupils still take place in tents, even in the old winter.

Our emergency relief campaign in Kabul takes place in cooperation with the Afghani Women’s Society which also holds the rights of the photos.

Any cookies that may not be particularly necessary for the website to function and is used specifically to collect user personal data via analytics, ads, other embedded contents are termed as non-necessary cookies. It is mandatory to procure user consent prior to running these cookies on your website.